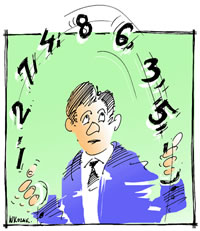 The Salt Lake Board of Realtors has questioned a recent report by RealtyTrac, which reported the home foreclosure rate in Utah increasing 294% in July 2008 (compared to July 2007). The report ranked Utah as the 9th largest foreclosure rate in the U.S. However, it is believed that the methodology used to calculate the figures might include loan payment defaults (30 days or more late), inflating the actual count.

In comparison, the Mortgage Bankers Association released data that said 99% of loans were not in foreclosure (although it should be noted that this data was for the first quarter not July).

All I can say is ‘Lies, Dam Lies and Statistics’, it just goes to show that you can make statistics says whatever you want.